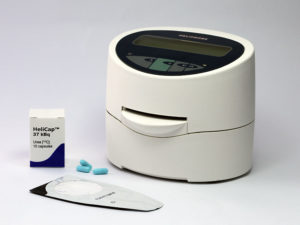 What is Helicobacter Pylori?

Helicobacter pylori is a bacterium which affects the lining of the stomach and is responsible for a large percentage of stomach and duodenal ulcers and is associated with stomach cancer and MALT lymphoma. People are usually infected in childhood and the infection can persist for many years. Helicobacter pylori is thought to be spread through person to person contact and is regularly spread between family members. If you are diagnosed to be infected with this bacteria, usually it can be eradicated easily.

How does the Heliprobe Test work?

The HeliProbe system is a ‘urea breath test’ which is a procedure used to identify Helicobacter pylori infections. You will swallow a HeliCap capsule containing crystals of urea. The urea has been exposed to extremely low levels of radiation. (The radiation is very low, it is less than the amount a person would be naturally exposed to on a normal day). If you are infected with Helicobacter pylori, the bacterium will consume some of the urea in a process which leads to minute amounts of radiation being breathed out by the patient as carbon dioxide. The HeliProbe analyser is designed to detect these minute levels of radiation, the presence of which indicates a Helicobacter pylori infection.

Yes. The HeliCap has no known or documented side effects.